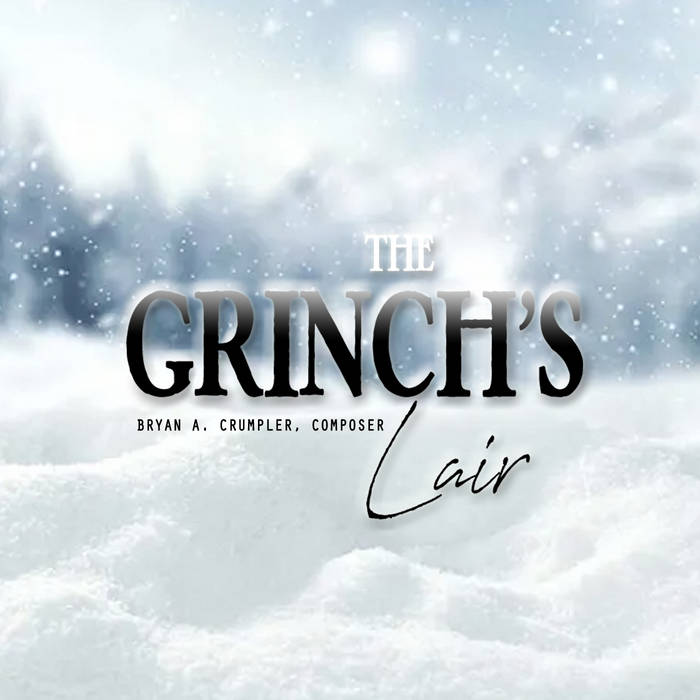 THIS VIP ALBUM WILL BE PUBLICLY AVAILABLE FOR THE JUNETEENTH FUNDRAISER AND WILL REMAIN AVAILABLE UNTIL JUNE 30TH, 2022

"The Grinch's Lair" is a cinematic symphony of holiday villains convening on Mount Crumpet. The work incorporates a sound collage installation as a backdrop to scenes IV, V and VI; and it is designed to work either as a ballet or in a concert setting.

We begin in the lair with the psychosurfer himself lazing around plotting to ruin Xmas. The intro – a cryptogram labeled "Captain Psychosurfer" – takes you through a jazzed up traversal to the summit of Mount Crumpet, where the Grinch takes his rest to scheme up treason and plot.

We then transition to a scene called Reindeer Games where, much like the Hunger Games, it's survival of the fittest. Three reindeer are captured and set off to race to see who will lead the sleigh to carry out his plan. The two frontrunners of the race, Comet and Dasher, both crash-land. Comet dies crashing through a window, while Dasher flies into an electrical powerline they cannot see and gets zapped to death entangling himself in the wire. Rudolph steps in and manages to survive without crashing from the brightness of his nose.

In the third scene, the Ghost of Xmas Future is summoned to the lair in a twisted séance to make a pact with Ebonita Scrooge.

In the fourth scene, Ebonita then "dances" with a Snow Devil, all while counting her coin.

Old Man Winter shakes it up in the fifth scene, prompting the Snow Devil to rage and summon Krampus and flesh-eating Wendigos to the lair, feasting on bad children along the way.

In the sixth scene, Sinterklaas makes an appearance in a parade of saints & ain'ts, recounting the themes in a fugue-like fuss, begging the villainous cohort not to destroy him in the Grinch's Kangaroo Court. He calls in Black Pete as a character witness, who woefully declines for being enslaved in all of Saint Nick folklore. Black Pete instead goes about his business counting birds in a reprise of underlying themes and motifs from the Summoning of Krampus (i.e. scene 5). NB: represented by flute, guitar & bass, this coda is the most symbolic of the movement for me, as it corrects for the historical association of Blackness with Devils of European Christmas folklore.

In the finale (an encore of "Raging Corona", originally from December 2020), the villains carry out their plot to unleash a lethal bioweapon "spiked tinsel" (i.e. the coronavirus) across the world to end Xmas, sprinkling it amongst the townspeople as the Grinch flies the sleigh into the night disguised as Santa. The townspeople jab themselves silly with the needles as the death toll rises to a dramatic peak, with uncertain ending.