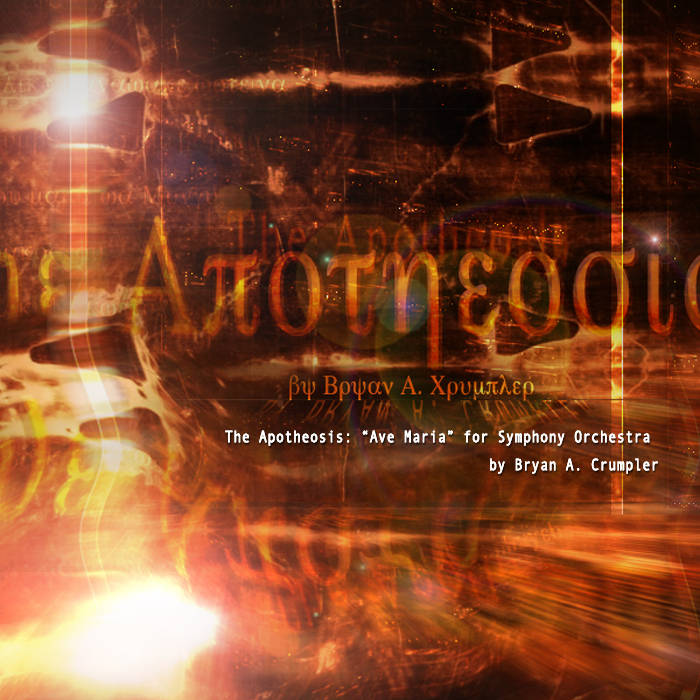 "The Apotheosis" is an apocalyptic tone poem, a 7 minute 24 second tale of light cast into darkness, the birth of the moon and earth, stars being ripped from the heavens, and its dust, giving rise from ashes to life, up until the end of days.

At the heart of the work rests a simple melody, borrowed from the well-known rosary prayer "Ave Maria," which takes shape rather amorphously throughout the work. It lies deeply buried in clusters of uncertainty from beginning to end, representing not only a tonal but personal battle between concepts of faith and science, humanity and divinity, pulchritude and ethereality and, ultimately, creation, destruction and the ascent to the divine.

Musings on these ideas stem from the Book of Revelations, which is a riddle unto itself, a manifestation of the paradox of a loving deity consumed with petulant anger, unleashing his wrath upon people of the earth... specifically we blips of stardust whose neurological signals fire in such ways as to conjure doubt as to our creator.

There comes flashes of lightning, rumblings, peals of thunder and a severe earthquake, and the cities of the nations collapse. Every island flees away and the mountains are wiped from existence. From the sky, huge hailstones, each weighing about a hundred pounds, fall on people.

A sound percolates from heaven like the roar of rushing waters and a loud peal of thunder, like harpists playing their harps. And a new song is sung before the throne.

War breaks out with a great dragon in heaven who is hurled down into the depths of the earth, cast out into the abyss of hell, burning forever and ever.

At another point, terror is unleashed as seven angels from the heavens are handed trumpets of doom.

As one sounds, hail and fire mixed with blood hurls down on the earth.

Another forces a huge mountain, all ablaze, to be thrown into the sea. A third of the sea turns to blood, a third of the living creatures in the sea die, and a third of ships get destroyed.

A meteor, blazing like a torch, falls from the sky contaminating the waters, poisoning all who drink it.

A third of the sun, moon and stars all get struck and succumb to darkness.

Smoke emerging from an wretched abyss blankets the atmosphere, eclipsing the light shining down on the earth as locusts with power like scorpions scatter from the blackness and descend upon the earth to viscously torture and torment humans for months on end.

Attendant spirits, i.e. angels, are mobilized to wipe out a third of mankind with three plagues of fire, smoke and sulfur.

And as the last angel trumpets, the heavens rip open, accompanied by flashes of lightning, rumblings, peals of thunder, and mother earth splitting from its core while being pelted with frozen rock.

This is the eschatology in the Book of Revelations. It has its parallels in Islamic eschatology. To note but a few Surahs:

13. And when the trumpet shall sound one blast
14. And the earth with the mountains shall be lifted up and crushed with one crash,
15. Then, on that day will the Event befall.
16. And the heaven will split asunder, for that day it will be frail.
Surah 69:13-16

1. When the heaven is cleft asunder, 2. When the planets are dispersed,
3. When the seas are poured forth, 4. And the sepulchres are overturned,
5. A soul will know what it hath sent before (it) and what left behind.
Surah 82:1-5. Al-Infitar

Science speaks of a much more terrifying event, one far more enduring and agonizing, lasting billions of years. It speaks of a burning sun that gets hotter and hotter as the waters from the seas evaporate to mist; and as the sun dies its galactic death, suffocating itself from smoking too much hydrogen and swelling into a red giant that swallows up our blip of the cosmos, it spews forth waves of ionized plasma, skinning the earth of its atmosphere, drying up the seas, and roasting the earth in its flames until it too, collapses under its own weight, crushing and ripping apart all that exists in its periphery, devouring light itself, until recycled anew into dust, spat out from the black holes feeding on the plankton of the universe until it too dissipates into the cosmos.

Fascinating tales all around.

released August 15, 2014
Cover Art: Composite image of the Apotheosis score overlain atop of the Shroud of Turin.